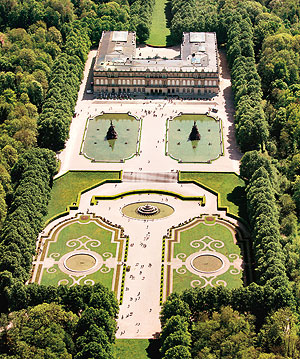 Top priority was given to copying the palace and gardens of Versailles as an epitome of monarchic splendour, in the construction of the dream worlds of King Ludwig II of Bavaria.

Making plans for this project commenced in 1868. Ludwig II purchased the Chiemsee island of Herrenwörth in 1873 as construction site, after the originally selected location in the Graswang Valley near Ettal turned out to be too small. Instead of a copy of Versailles, Schloss Linderhof developed there from an additional building.

It was not the intention of Ludwig II, to copy Versailles in detail. The central rooms in the middle section of the palace – of special significance here the imposing show bedroom and the hall of mirrors – sufficed for his slipping into the role of Roi du Soleil.

With regard to the gardens planned by the court gardens director Carl von Effner from 1875 onward, this meant that merely the garden area of the central axis had to be copied in detail.

This included the "parterre d'eau" towards the west, consisting of two large basins with the surmounted statues of Fama and Fortuna expressly requested by Ludwig II to highlight the mythological effect, the flower parterre with the Latona fountain and the "Grand Canal", in front of whose mirror surface an Apollo fountain was to rise up. 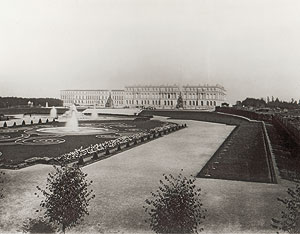 Visible from the bedroom, was the access avenue of 900 metres projected length in an easterly direction, at the lakeside end of which a boat landing stage was planned.

After extensive preparatory work shifting earth, work on the gardens could be started in 1882 – four years after laying the palace foundation stone in May 1878. The design of the garden's central axis, so important for the Herrenchiemsee experience – which constituted about one third of the total planned garden – was carried out under great pressure and largely completed by the time King Ludwig II died in June 1886. Only the Apollo fountain and the boat landing stage remained uncompleted.