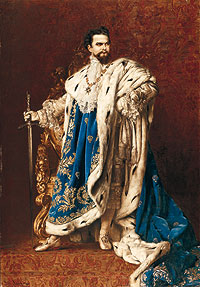 Even before he died, the king had already become something of a legend. "I want to remain an eternal mystery to myself and others", Ludwig once told his governess, and it is this mysterious element that still fascinates people today.

The poet Paul Verlaine called Ludwig II the "only true king of this century". The shy dreamer, who had none of the typical characteristics of a popular king, lives on, still idolized, as "the Kini". His palaces, which were barred to strangers, have been visited by over 130 million people since his death. They are records in stone of the ideal fantasy world which the king built as a refuge from reality. His historic, poetic and ideal interpretation of his role as king was finally his downfall. It is possible that he preferred to die rather than return to reality. 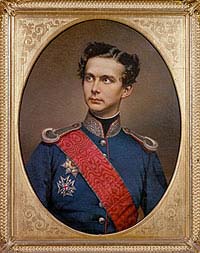 Ludwig and his brother Otto were strictly brought up with an emphasis on duty. Their parents Maximilian II of Bavaria and Marie of Prussia kept themselves at a distance.

"Ludwig enjoyed dressing up … took pleasure in play acting, loved pictures and the like … and liked … making presents of his property, money and other possessions", said his mother. This was not to change. His vivid imagination, his tendency to isolate himself, and his pronounced sense of sovereignty were also already evident when Ludwig was a child. 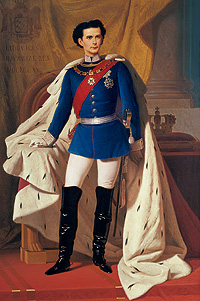 In 1864 Ludwig II acceded to the throne at the age of 18 without any experience of life or politics, but adored by women.

Looking back in 1873, he described it thus:
"I became king much too early. I had not learned enough. I had made such a good beginning … with the learning of state laws. Suddenly I was snatched away from my books and set on the throne. Well, I am still trying to learn …"

In 1866 Ludwig II suffered the biggest defeat of his life: in1866, the expanding state of Prussia conquered Austria and Bavaria in the "German War". From then on, Bavaria's foreign policy was dictated by Prussia and the king was only a "vassal" of his Prussian uncle.

Crown Prince Ludwig was already fascinated by the music dramas and writings of Richard Wagner. He wanted to bring the composer to Munich as soon as he became king, and realize his dream of an opera festival. In 1864 he summoned Wagner to him and thus rescued him from a serious financial crisis.

"… Today I was brought to him. He is unfortunately so beautiful and wise, soulful and lordly, that I fear his life must fade away like a divine dream in this base world … You cannot imagine the magic of his regard: if he remains alive it will be a great miracle!" wrote the composer after his first meeting. 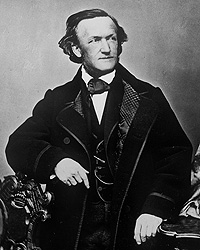 In the following years, Munich became the music capital of Europe with the premieres of "Tristan und Isolde" (1865), "Die Meistersinger von Nürnberg" (1868), "Das Rheingold" (1869) and "Die Walküre" (1870). Ludwig II thus continued the patronage tradition of the House of Wittelsbach in grand style.

Wagner was however forced to leave Munich by the end of 1865 because of conflict with the government. Later Ludwig II also protested against the anti-Semitic sentiments expressed by his friend. He nevertheless continued with his lavish support for Wagner's work. The monumental festival theatre planned for Munich was built in a vastly simplified form in Bayreuth and inaugurated in 1876 with the cycle "Der Ring des Nibelungen". In 1882 "Parsifal" was premiered here. Without Ludwig II's commitment, there would never have been a Bayreuth Festival.

Ludwig II was possessed by the idea of a holy kingdom by the Grace of God. In reality he was a constitutional monarch, a head of state with rights and duties and little freedom of action. For this reason he built a fantasy world around him in which – far removed from reality – he could feel he was a real king. From 1875 on he lived at night and slept during the day.

Idealized designs by scene painters for a "New Hohenschwangau Castle" high above the tranquil Hohenschwangau of Ludwig II's father, a "Byzantine Palace" and a copy of Versailles were already in existence by 1868. From the beginning, Ludwig's fantasy world embraced several different epochs. The "New Castle" (subsequently Neuschwanstein), was based on Christian kingship in the Middle Ages, and the new Versailles, built from 1878 on the Herreninsel, recalls the baroque absolutism of the Bourbon King of France. Linderhof in the Graswangtal, built from 1869, imitates a variety of styles, with the help of the latest technology.

The latest technology was also used for the highly elaborate coaches and sleighs in which the king travelled at night, sometimes in historic costume.

Ludwig spent more and more time in the mountains and correspondingly less time in Munich. His fantasy world was further maintained by "private performances" in the Hoftheater: operas and plays performed for the king alone.

Ludwig II increasingly identified himself with Parzival, the legendary medieval figure who became Grail King through his purity and faith and thereby redeemed his sinladen uncle. The inner battle for freedom from sin and purity is distressingly evident in the diaries of the extremely pious king. This particular legend is the subject of Richard Wagner's last work "Parsifal", which he began in 1877. Wagner and his circle privately referred to the king as "Parsifal", and his problems were incorporated into the drama of the Grail. Neuschwanstein, originally a monument to the minnesingers of medieval times, was reinterpreted as the Castle of the Holy Grail and the Throne Room was redesigned as the Hall of the Holy Grail – dedicated to the mystery of salvation for the world.

The "ideal monarchical poetic solitude" which the king chose for himself was not in the long run compatible with his duties as a head of state. The new settings he was constantly devising for himself were equally beyond the private means of a king. Ludwig failed through his desire to anchor his illusions and dreams in reality.

From 1885 on foreign banks threatened to seize his property. The king's refusal to react rationally led the government to declare him insane and depose him in 1886 – a procedure not provided for in the Bavarian constitution. Ludwig II was interned in Berg Palace. The next day he died in mysterious circumstances in Lake Starnberg, together with the psychiatrist who had certified him as insane.