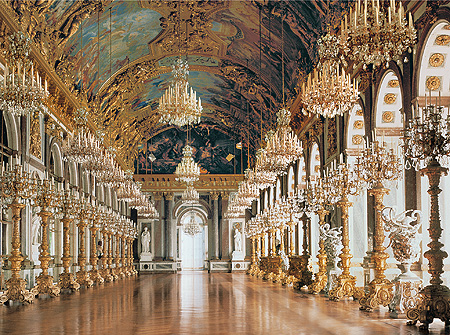 For the gallery at Herrenchiemsee, the king demanded a scale model of the Hall of Mirrors at Versailles. The gallery was created in 1879-1881 to plans by G. Dollmann, under whose direction it was also completed. At 98 metres in length, the hall is longer than the original at Versailles. Together with its corner rooms, the Hall of Peace and Hall of War, it spans the palace's entire garden front.

back to the Council Chamber

further on to the Hall of Peace